The Cultural Policy and Management Research Centre (KPY) at Istanbul Bilgi University is once again delivering its annual publication, covering major issues and debates of the 2014-2015 period. This 2014-2015 issue is the fifth in the KPY Yearbook series, published by Istanbul Bilgi University Press. The central theme of the 2014-2015 Yearbook is the changing relationship between state and culture – thus the overall title of the Focus section is Cultural Interventions. It is edited by Kevin Robins and Burcu Yasemin Şeyben. 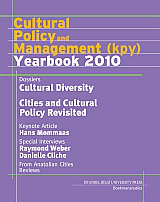 The second issue of KPY Yearbook underlines that the prerequisite of creating a comprehensive discussion on cultural policies in Turkey and developing new perspectives is conducting research within this field, evaluating the knowledge and documents and combining these.  The first dossier in this issue which includes two special dossiers, is "Cultural Diversity" that is based on the UNESCO Convention on the Protection and Promotion of the Diversity of Cultural Expressions.  The subject of the second dossier is "Cities and Cultural Policy Revisited" with the impact of the increasing interest on urban studies at a global scale and the current situation in Turkey.
Istanbul Bilgi University Publications, 2010.

FROM ANATOLIAN CITIES
Ülkü Zümray Kutlu: Voice from the Field: the Cases of Kars and Çanakkale in the Context of Participatory Local Cultural Policy Development in Turkey
Eylem Ertürk: Culture and Art in Kars | 2005 – 2009 The Experience of the Kars Arts Centre (KAC)
Pelin Başaran: Looking at Kars through the Monument of Humanity
Esra Aysu Aysun: Leaps in Contemporary Art in the New Era and the Case of A77

OTHER ARTICLES
Derya Nüket Özer: The Forgotten Human Aspect of Conservation
Banu Pekol: Architectural Heritage in Turkey in Light of the Commodification of Cultural Products
Rana Yazaji: State Planning and The Emerging Role of Civil Society in Cultural Policies in Syria