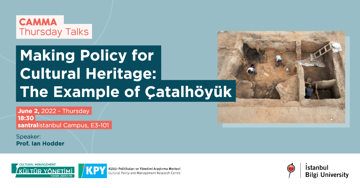 Organised by İstanbul Bilgi University Cultural Management Master Program (CAMMA) and Cultural Policy and Management Research Center (KPY), CAMMA Thursday Talks will host Professor Ian Hodder, who was the former director of Çatalhöyük Research Project and a pioneer of postprocessualist theory in archaeology on the 2nd of June.

In the Cultural Policy Yearbook 2022 keynote speech titled “Making Policy for Cultural Heritage: The Example of Çatalhöyük”, Professor Hodder will recount numerous attempts at cultural heritage management at Çatalhöyük Excavations, which he directed from 1993 to 2018. Based on these cultural heritage management attempts where there were tensions between local, regional, national and global interests, why cultural policies that assert heritage as universal value should be softened radically with local cultural concerns will be discussed.

Making Policy for Cultural Heritage: The Example of Çatalhöyük

The talk will be held in English

You can register here to attend the talk that will take place free of charge on Thursday, June 2, at 18.30 at Istanbul Bilgi University santralistanbul Campus.

Ian Hodder was trained at the Institute of Archaeology, University College London and at Cambridge University where he obtained his PhD in 1975. After a brief period teaching at Leeds, he returned to Cambridge where he taught until 1999. During that time, he became Professor of Archaeology and was elected a Fellow of the British Academy. In 1999 he moved to teach at Stanford University as Dunlevie Family Professor in the Department of Anthropology and Director of the Stanford Archaeology Center. In 2021 he moved to teach at Koç University, Istanbul.

His main large-scale excavation projects have been at Haddenham in the east of England and at Çatalhöyük in Turkey where he worked from 1993 to 2018. He has been awarded the Oscar Montelius Medal by the Swedish Society of Antiquaries, the Huxley Memorial Medal by the Royal Anthropological Institute, the Fyssen International Prize, the Gold Medal by the Archaeological Institute of America, and has Honorary Doctorates from Bristol and Leiden Universities. In 2019 he was appointed Companion of the Order of St Michael and St George in the Queen’s Honor List.